new things for your box

One of my all-time favourite curries in the world is a katsu curry. Do you know what's even better? a vegan katsu curry!

I remember the first time I had one, one of my hunnis made one for me when we were doing our farm work in inland Queensland in Australia (man, what an experience that was!). The farm work not that great but the curry she made – holy moly so, good. Anyways I was hooked from that moment on.

Some banging Japanese restaurants do AMAZING katsu curries in Melbourne. They are so good! But it can be super hard to find a good vegan or veggie one. Everyone loves the chicken but trust me when I say hunni, this eggplant one is FANTABULOUS.

Another great thing with this eggplant katsu curry is there is no need to worry about salt bathing or crumbing. This is just easy, simple cooking hunni because sometimes we want a great vegan katsu curry without all the fuss.

A brief history on the katsu curry.

As always, I love to find out the history of the dish that has inspired me to cook (she is a history nerd). Curry was introduced to Japan by the British (of course) in the 19th century. British sailors took curry powder with them to Japan when Japanese sailors were suffering, big time with beriberi some type of vitamin deficiency.

To stop their sailors from dying, they looked at the British navy diet and surprisingly, they ate a ton of curry. Wild right like navy curry is apparently a big thing! They even made a navy diet cookbook back in the day. Like mind blown, imagine eating now like a bloody sailor WILD! However, curry is amazing! so I rate that.

Anywho the Brits curry was mainly meat, butter, root veggies and sauce thicked with flour (sounds a lot like katsu curry right?) this combination had the vitamin that the Japanese were missing and boom curry, saved the day.

Then, some other things happened and, they started to sell curry in restaurants in Japan and, now we have Japanese curry. If you are interested check, out the full story here.

How to make the best curry.

This vegan eggplant curry is super easy to make hunni. It will probably take you like 45 minutes depending, on how quickly you chop.

If you have an air fryer, this recipe is even easier, as it cooks the eggplant amazingly. Chop into disks, chuck in the air fryer and let cook for 25 minutes hunni. How easy does that sound?

If you do not have an air fryer, no sweat hunni, just chuck them in the oven. No need to do that salt bath thing, it works well for this curry having the eggplant a little bit chewy. By all means, if you want to salt bath your eggplant first, go for it.

The sauce is super simple and tastes like one of those golden curry cubes. I not even kidding, it really does, but heaps better obviously. The best thing about this sauce is you’ll probably already have the ingredients in your pantry.

Dice up the onion and garlic chuck into a pan with some oil sauté. Add in your spices and saute for about 10 minutes.

This is super important to make sure that the sauce becomes that thick gravy-like sauce. Add in your flour and, make sure you coat everything. Then add in your stock slowly with the soy sauce.

ADD IN THE LIQUID SLOW AND STIR, STIR, STIR. I’m not being dramatic if you add it all in at once and don’t continue to stir, you’ll get lumpy flour. Trust me boo, no one wants lumpy flour in their sauce.

Let simmer for 15 minutes and, then boom it's done. Just pour that delishesness over your cooked eggplant. SO GOOD, SOO EASY and, it didn’t come from a cube.

Why you should make vegan katsu curry.

BECAUSE IT’S SO DAM GOOD.

I’m not yelling at you I promise, but trust me hunni it's amazeballs.

Why should you make a vegan katsu curry instead of a chicken or pork one? You don’t have too but, we eat a lot of meat and not enough veggies, so just mix it up and try a vegan dish once in a while. I promise you, you’ll love it. If you don't, well, at least you tried something new.

The cubes you buy in the supermarket are usually packed with additives and palm oil (avoid palm oil at all costs). Therefore if you make it yourself, it’s better for your health and the orangutans. I think that is a pretty good reason to make it yourself.

Plus, as I said before, it tastes SO DAM Fantabulous.

My mate loves a chicken katsu curry and, he’s obsessed with this one.

How to mix up your katsu curry.

This sauce would go so well with broccoli or cauliflower if you’re not an eggplant fan. I would cook them the same way roast in the oven or air fryer.

Rice wine vinegar is not a major ingredient, if you don’t have it that’s ok hunni, you can use white vinegar or apple cider vinegar instead.

How to serve your curry.

Pair this curry with your favourite rice dish. For an extra veggie hit, pair with some cauliflower rice.

My favourite additional toppings are parsley and sesame seeds, not necessary but, it makes it look pretty.

After a drink pairing? I thought so…

To match the saltiness of the sauce, a good IPA would work wonders. If IPAs are too much, then I would go for either an American pale ale or a pale ale would also go nicely.

If your keen to make it a Japanese inspired evening. Then you can’t go wrong with SAKE! Oh, my sake is amazing, and it goes so well with curry. Be careful it’s super easy to have one to many sake’s, trust me I’ve been there many times.

Fun fact for you did you know that sake is actually classified as a rice beer! Blew my mind when I found that out.

Anyways moving on.
If your keen on a side you, could add a cucumber and carrot salad, or any salad you like to get that extra hit of veggie goodness.

Most of all hunni, just enjoy yourself in the kitchen. Put on some tunes, get a mate round or cook with your mates at home. Have fun, laugh and keep on cooking good looking.

I hope you enjoy this recipe.

On the eggplant vibe? give these a whirl. 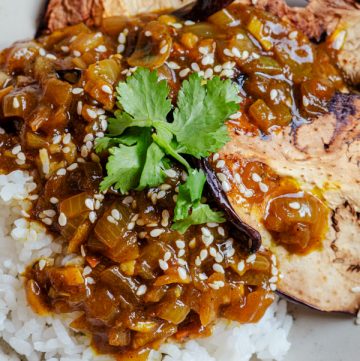 for your weekly recipe fix.

Hi, I'm Charlotte! Welcome to babe street the home of good food, good moves and good times. If I'm not having fun in the kitchen then you'll either find me dancing, on my yoga mat or sipping a couple at the bar.